Ever since the new iteration of Queer Eye was launched on Netflix earlier this year, people all over the world have felt inspired by each of the cast member’s unique talents and the way in which they use them to transform people’s lives. However, while the expertise of the Fab Five lies in different fields, one thing that they undeniably have in common is their ability to rock a red carpet. Yesterday, Jonathan Van Ness, Karamo Brown, Tan France, Antoni Porowski and Bobby Berk appeared at the Creative Arts Emmys together, looking dashing as the show collected three awards. Photos of the Fab Five at the glamorous event have gone viral on social media, with many people expressing their utmost admiration for the fashionable ensembles. The outfit worn by grooming expert Jonathan has received an especially great deal of attention, with one person tweeting: “What did we do to deserve Jonathan Van Ness?” in response to his dress. Resident culture guru Karamo was also heavily praised for his choice of attire, which included a regal burgundy cape to match the red carpet. “After seeing Karamo’s outfit last night all I want is a cape,” one person wrote. Another person even created a piece of fan art of Karamo depicting him in the cape, which he then shared on his Instagram story. Tan, who’s in charge of fashion on Queer Eye, wore a smart black tuxedo with a small waistcoat underneath the jacket. Food expert Antoni donned a chic suit, while head of design Bobby opted for an all-black ensemble.

Here’s a breakdown of the stylish outfits worn by the Fab Five on the red carpet: 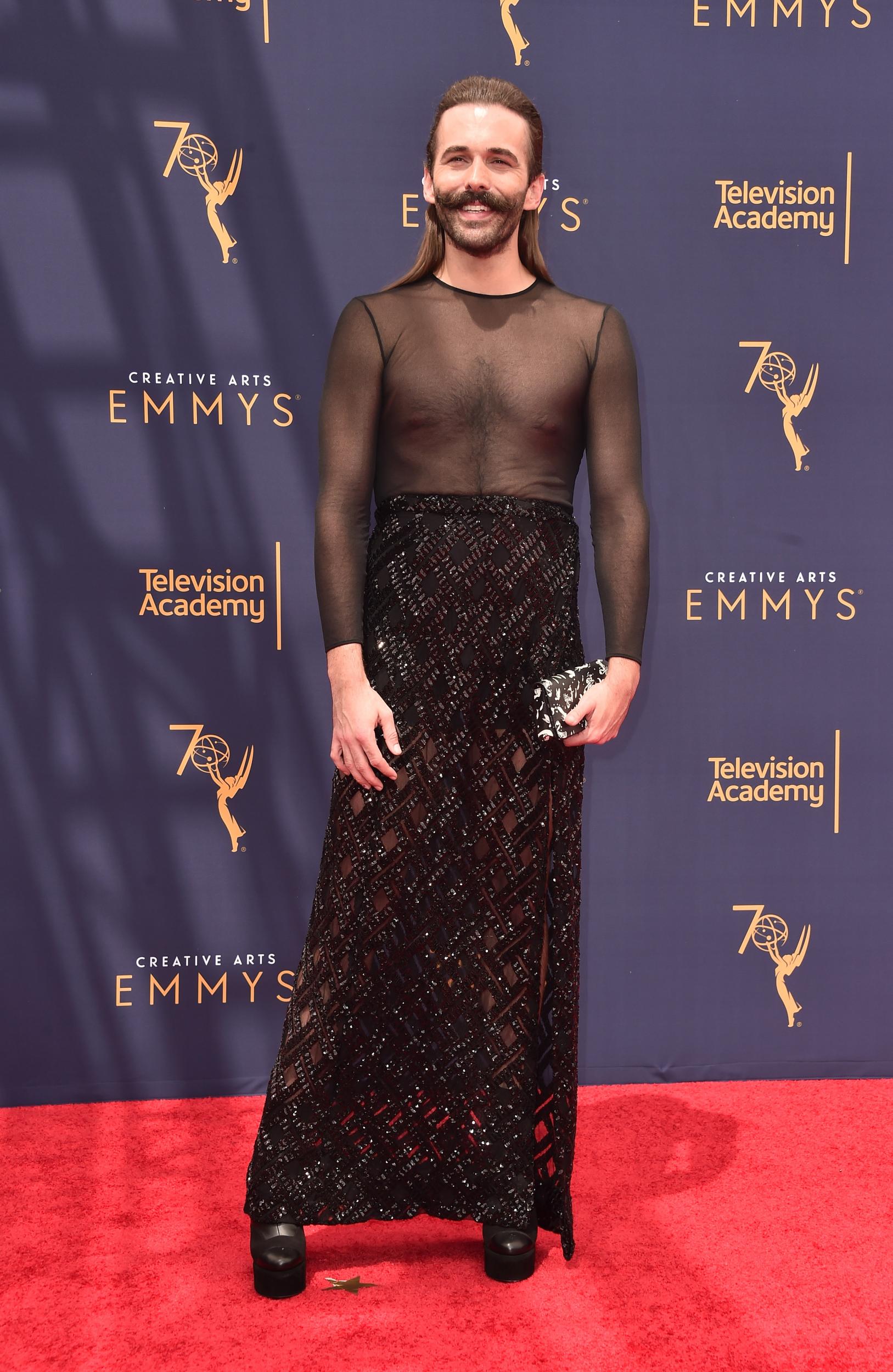 Jonathan’s dress was designed by Maison Margiela, a French avant-garde fashion brand. The dress features a sheer top with long sleeves and an embellished, thigh-split skirt. He paired the look with platform Pierre Hardy black boots and had his hair slicked back for a sleek overall finish. While many have expressed their adoration for Jonathan’s spectacular red carpet look, he’s also received some hurtful comments from “transphobic” naysayers. He responded to one of the comments writing: “I love all these transphobic comments in here. ‘The guy in a dress’ is insulting and for anyone that doesn’t see the implications is blind.” 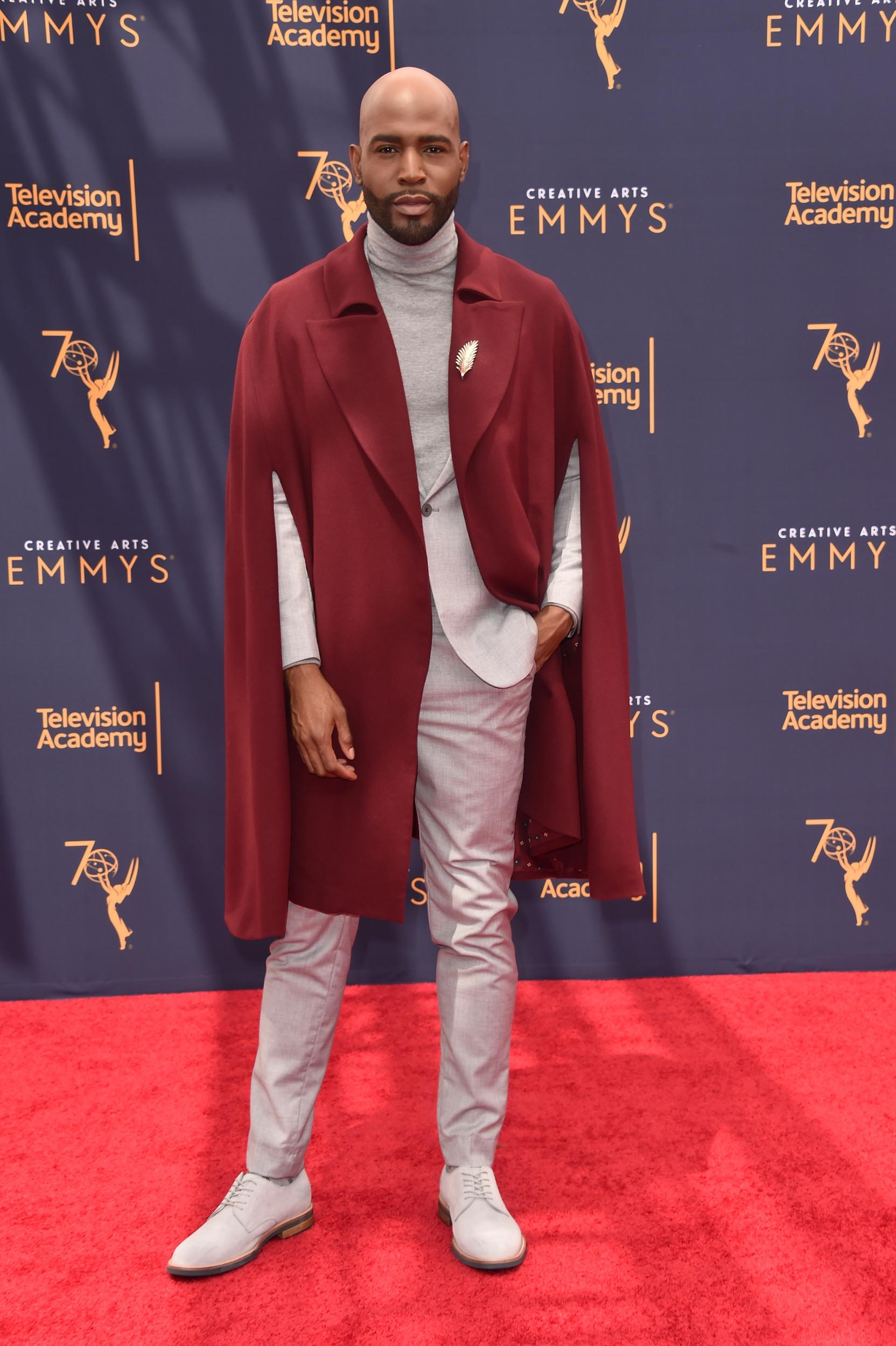 Karamo is known for being a very smooth talker on Queer Eye, convincing people on the show to take part in a variety of activities such as ballroom dancing, obstacle courses and aerial acrobatics. However, he’s seemingly equally smooth on the red carpet. Karamo wore an oxblood cape designed by Octavius Terry-Sims, co-founder and head designer of Groom. The cashmere cape is from Groom’s upcoming collection. 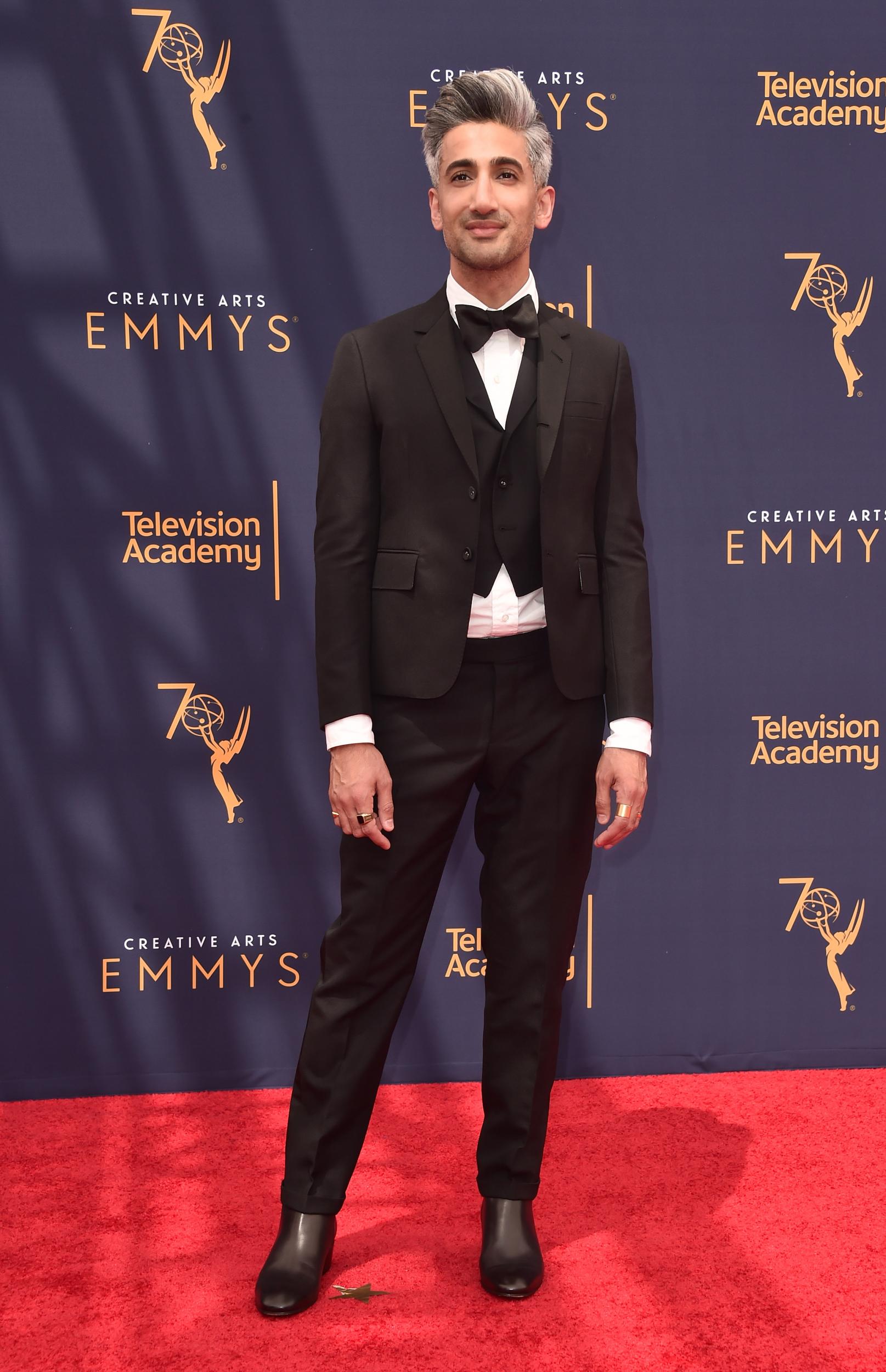 As the fashion aficionado of the makeover show, there was never any doubt that Tan would turn up at the Creative Arts Emmys looking as elegant as possible. Tan wore a suit designed by Thom Browne, a designer brand based in New York. The suit featured a small waistcoat underneath the jacket, which one person on Instagram described as “cute”. He finished off his ensemble with a pair of Christian Louboutin shoes. 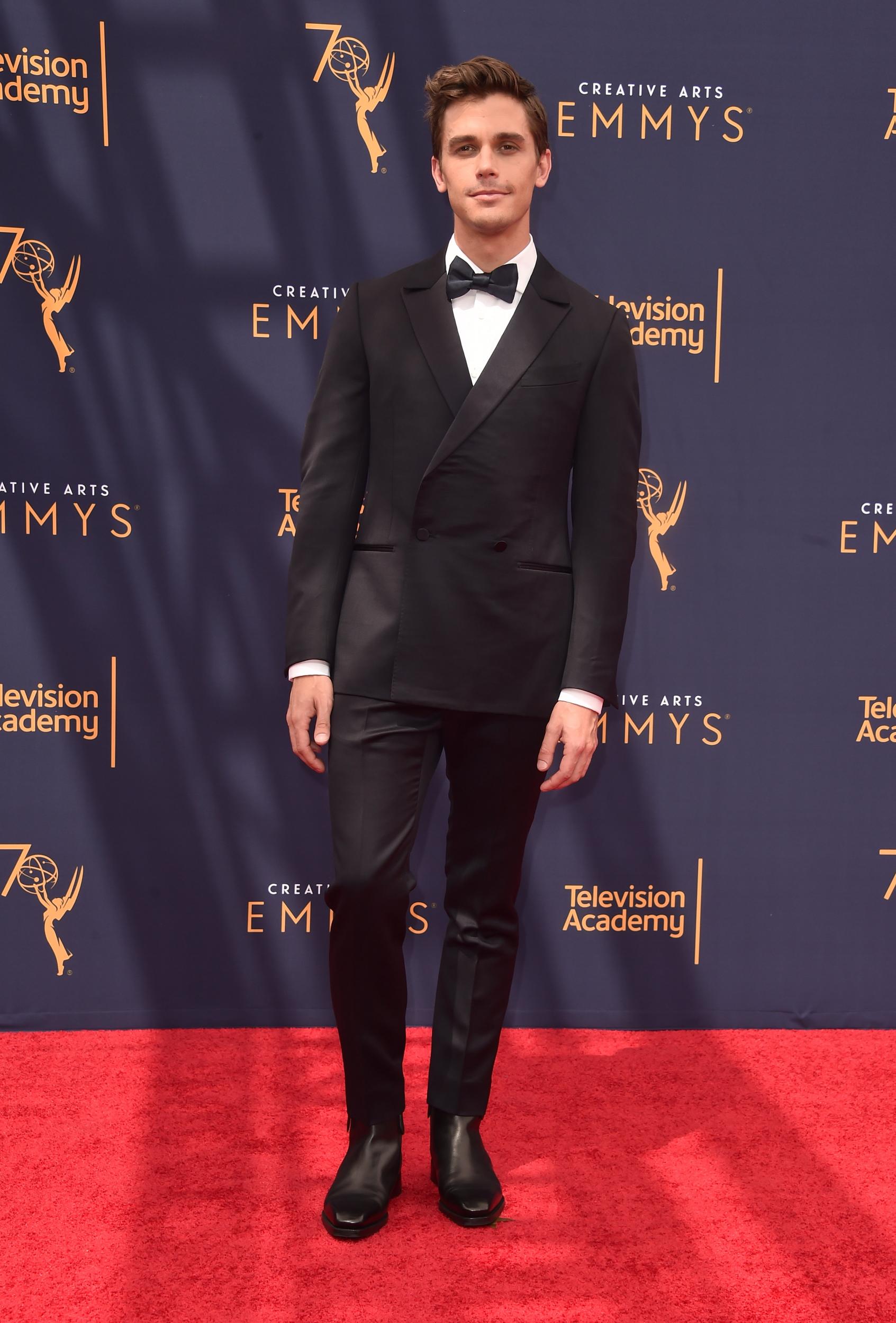 Food may be his forte, but Antoni certainly knows how to fix up and look sharp. Antoni wore a Zegna Couture suit for his appearance at the Creative Arts Emmy Awards. He posted a series of photos on his Instagram account showing him getting ready for the night, which sent many of his fans into a frenzy. “Just Queer Eye breaking the internet,” one person commented, with another person writing: “I can’t even.” 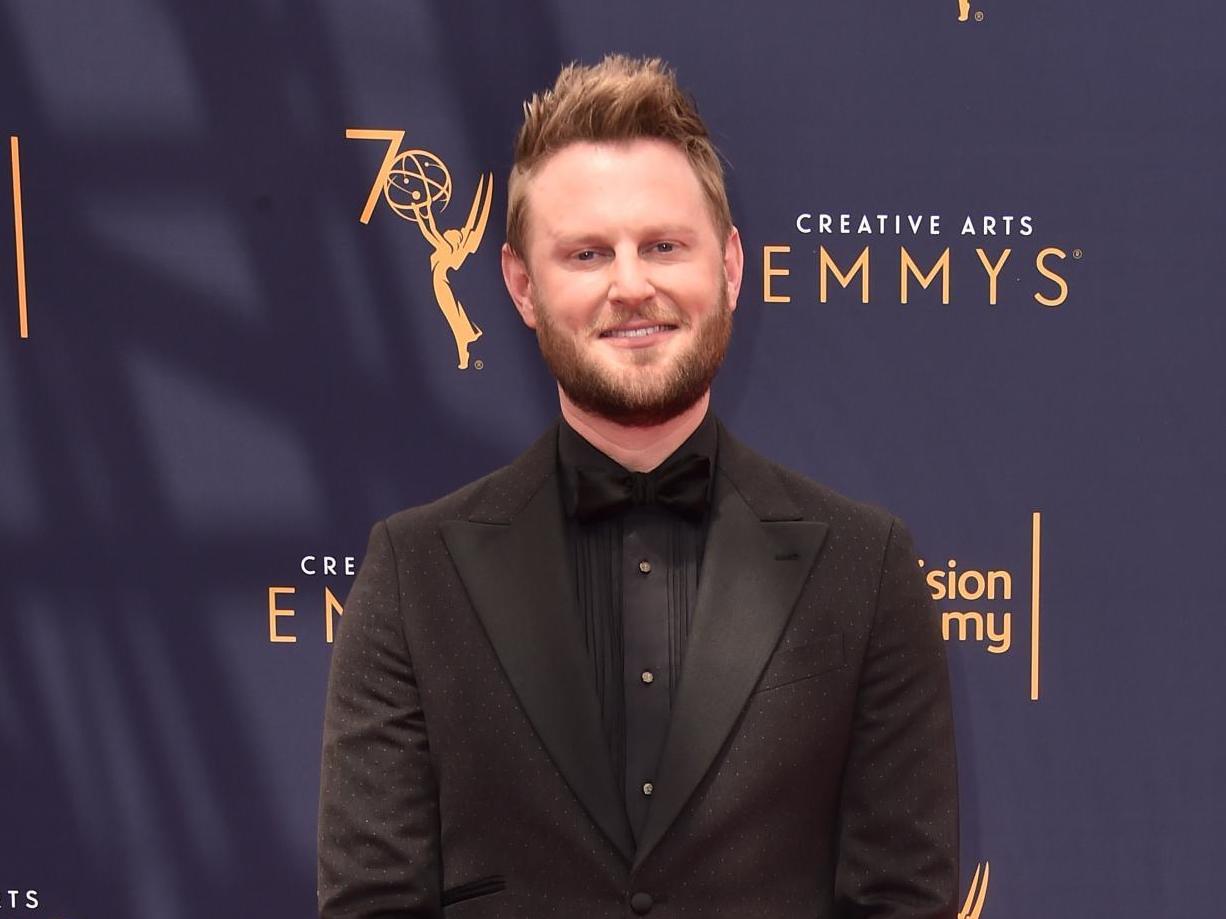 Bobby is known for being able to turn a home upside down and transform it in a matter of days. While he may usually choose a variety of patterns and colors when redesigning a household, he decided to opt for an all-black ensemble for the Emmys. Bobby wore a suit designed by Joseph Abboud for the occasion. Joseph Abboud is a menswear fashion designer and author hailing from Boston, USA. Source: The Independent