MTV VMAs 2018: Best-Dressed on The Red Carpet, from Kylie Jenner to Ariana Grande

The MTV Video Music Awards are nothing if not a masterclass in artistic prowess. Rewarding some of the industry’s most esteemed talents, with Camila Cabello and Cardi B taking home some of the most prestigious awards, the ceremony provides an opportunity for stars to exhibit their sartorial skills on the red carpet, which this year was a notable shade of fuchsia. While Blake Lively and Morgan Saint subverted womenswear conventions with androgynous trouser suits, Jennifer Lopez and Cardi B proved that Hollywood grandeur is far from its expiry date in decadent gowns. Meanwhile, Algee Smith and Marshmello reigned supreme in the menswear department for their eye-catching style quirks. See which stars earned their style credentials at this year’s VMAs and bask in the splendour of the music industry’s eclectic fashion choices. 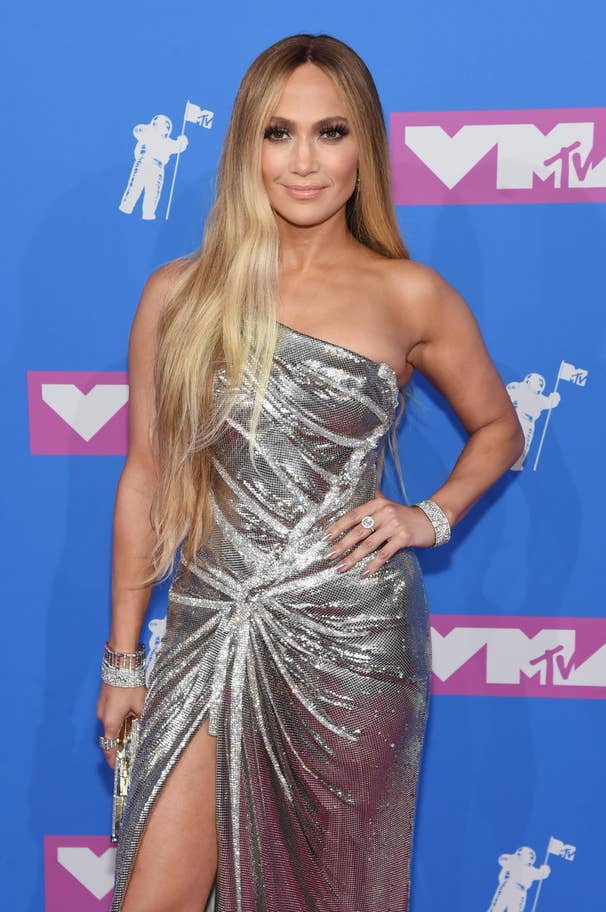 A knight in shining sartorial armour, J. Lo arrived in an off-the-shoulder chainmail gown by Versace: a far cry from her humble ‘Jenny from the block’ days. 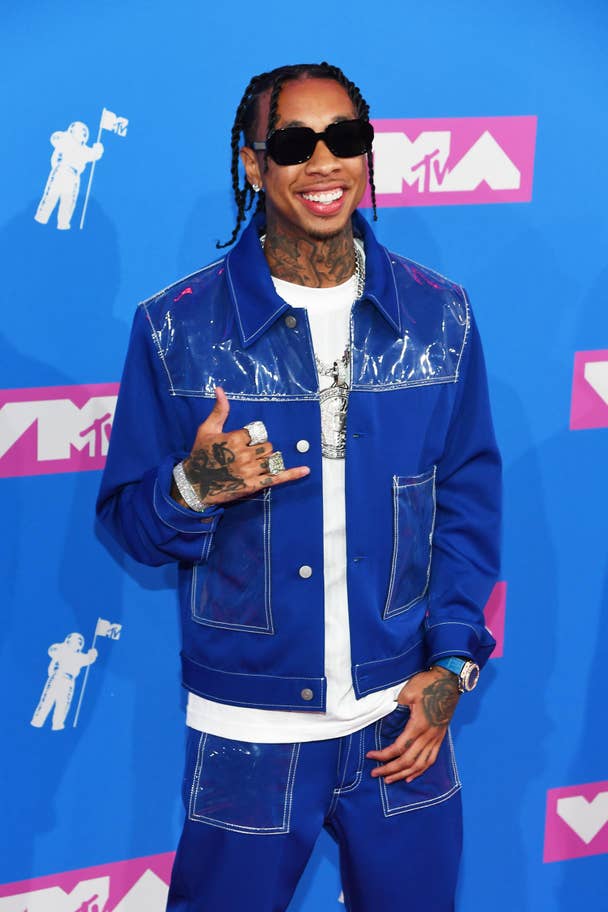 Double denim is the nineties nod that never dies, as Tyga proved on Monday evening in a co-coordinating denim-inspired look by Maison Margiela. 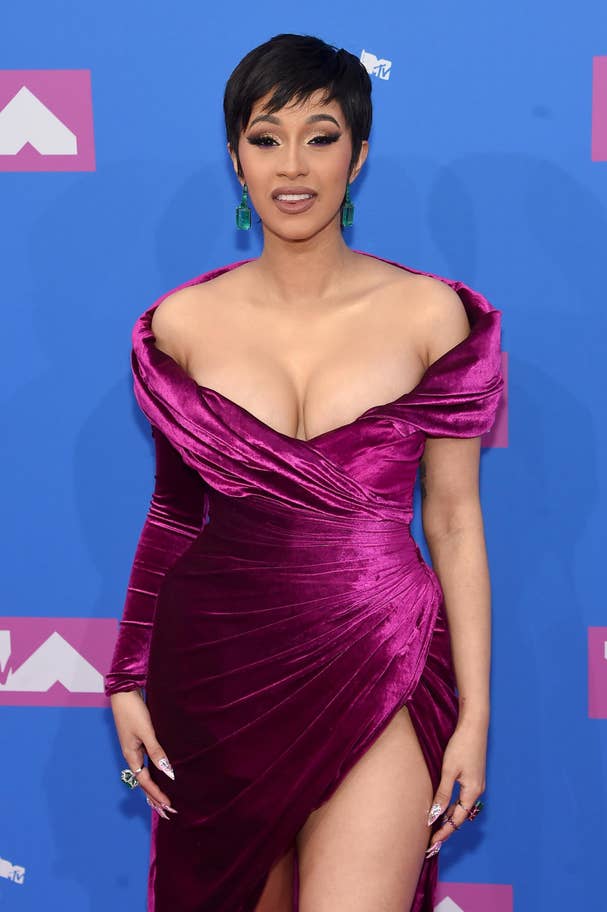 The ‘Bodak Yellow’ singer brought a splash of Marilyn Monroe-era glamour to the VMAs in this velvet magenta gown designed by Alexander Acosta. 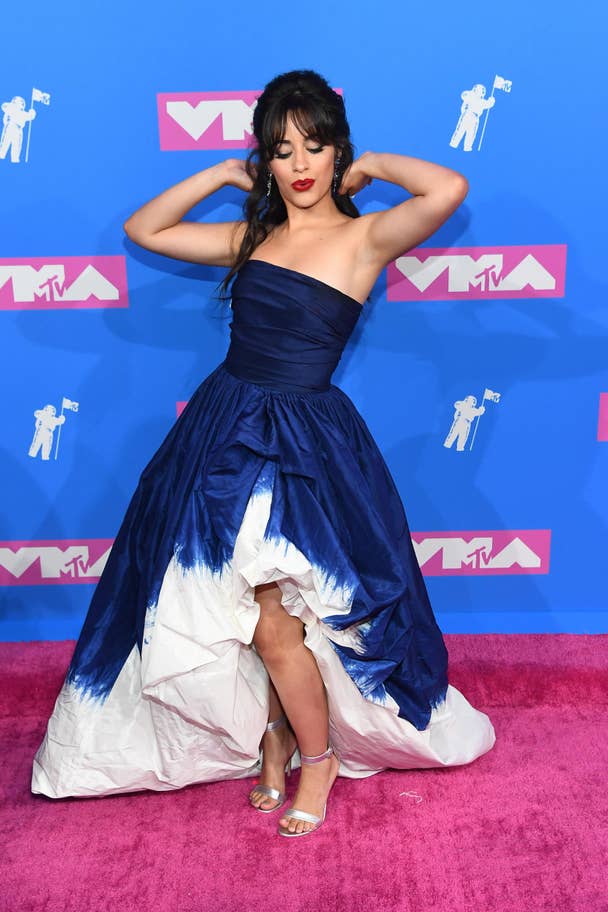 One of the major players at this year’s ceremony, Cabello took home four Moonman trophies, the ‘Havana’ singer channeled a fairytale-chic aesthetic in a voluminous navy and white gown by Oscar de la Renta. 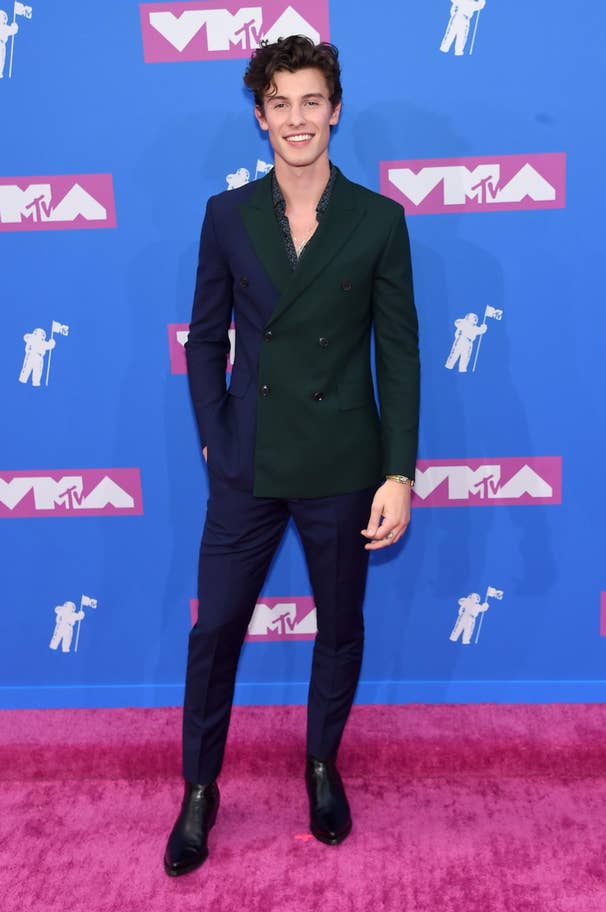 Switching up the signature monochromatic suit and tie look that dominates the limited catalogue of male occasionwear, the ‘Stitches’ singer cut a slick silhouette in a navy and olive suit by Paul Smith. 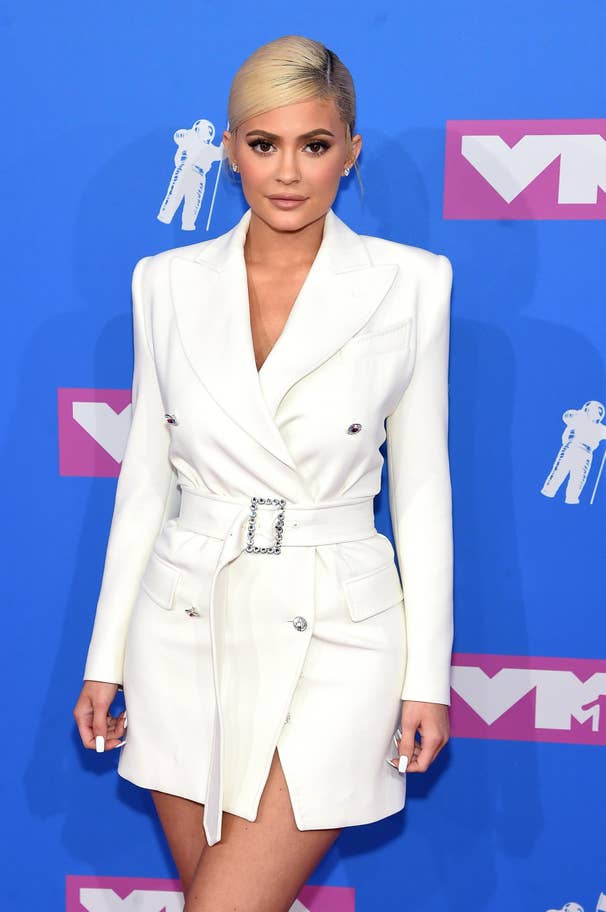 Making a case for the tailored mini dress, the reality star-turned-entrepreneur arrived wearing a white trench dress by Tom Ford, which came complete with a diamante belt buckle for a splash of sparkle, naturally. 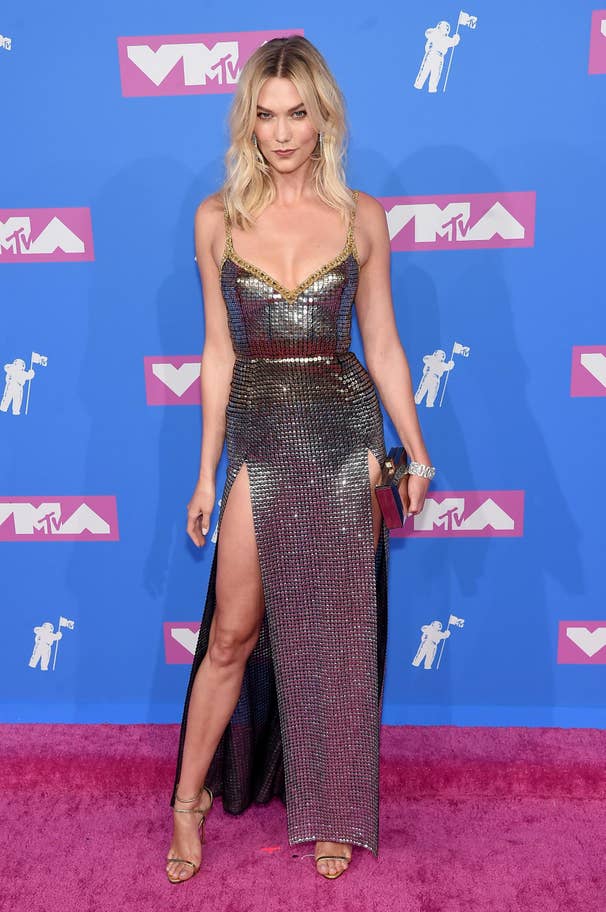 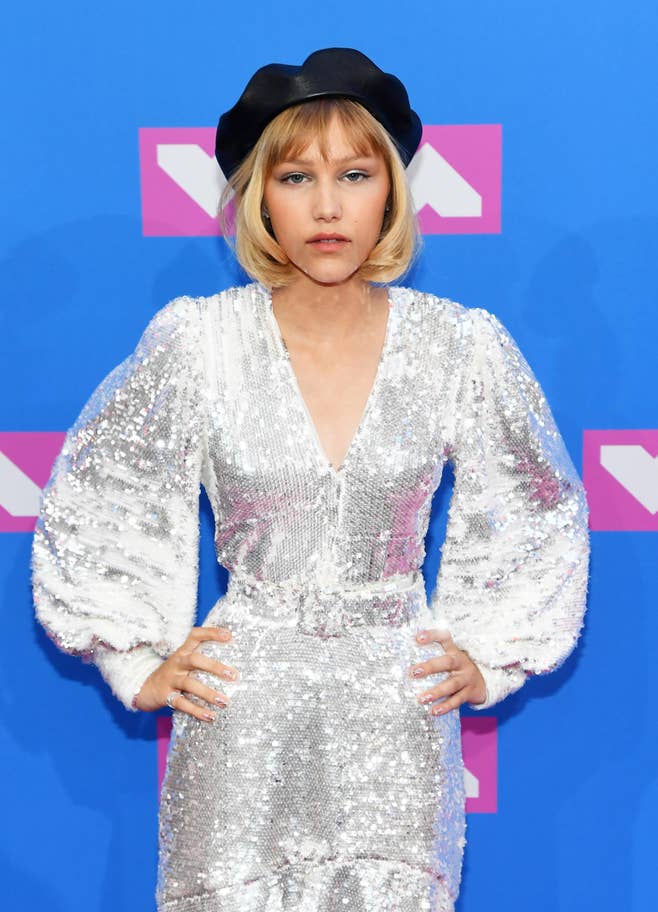 The ‘Moonlight’ singer offset the grunge of her black leather beret with a shimmering jumpsuit straight out of Studio 54. 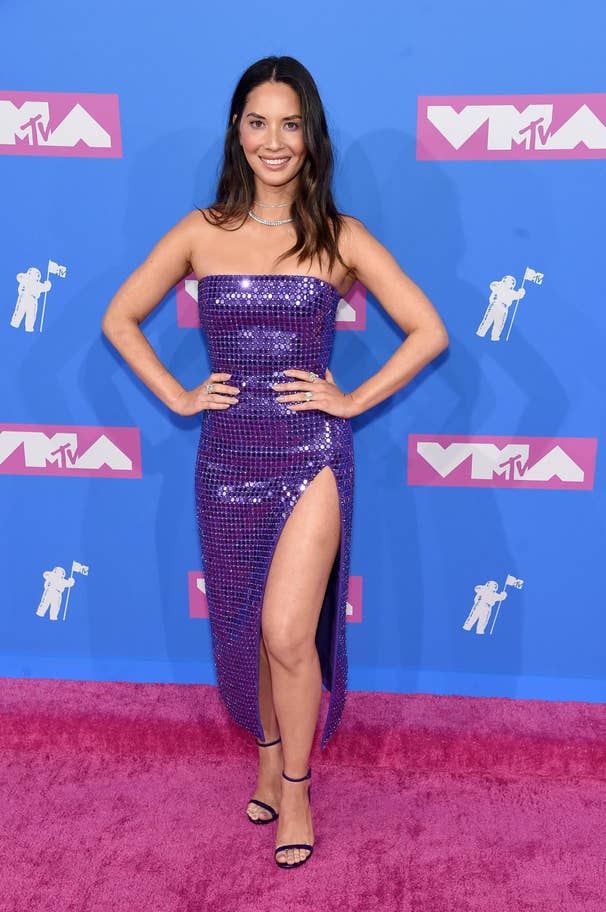 The ‘X-Men: Apocalypse’ actor injected a splash of colour among the sea of monochrome in this strapless purple gown by David Koma. 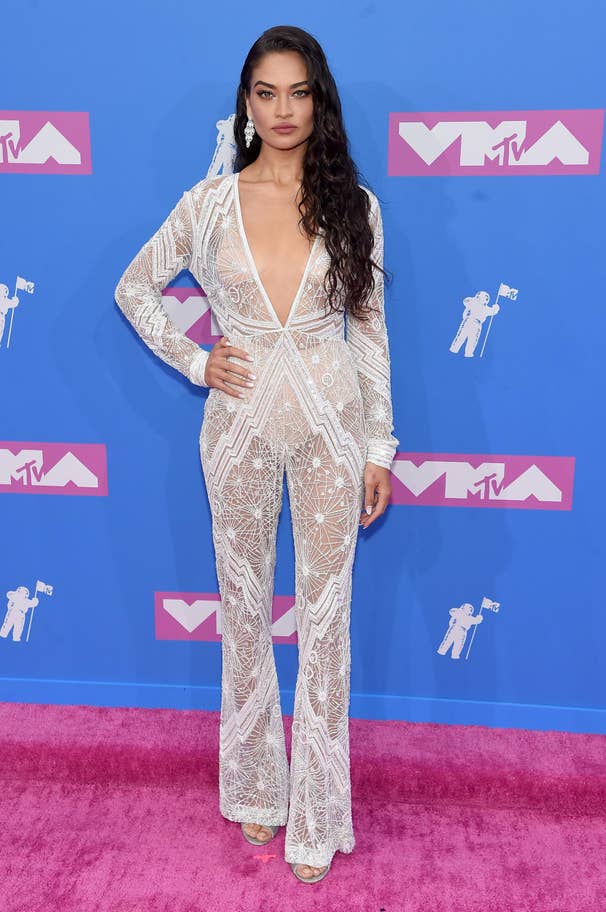 If anyone could pull off a sheer lace jumpsuit without looking like they belong in a ABBA tribute band, it’s Shanina Shaik. The Australian model radiated in a Naeem Khan jumpsuit, looking nothing short of statuesque. 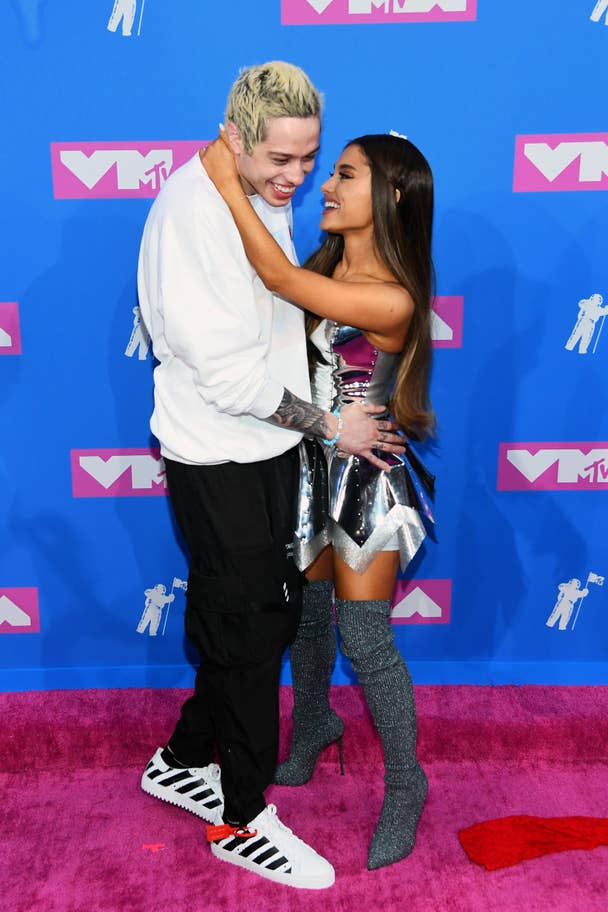 No display of affection is quite as palpable as two millennials in the throes of young love, as Davison and Grande clearly demonstrated on Monday’s pink carpet. The ‘God is a Woman’ singer opted for a steely silver mini dress while her fiancé kept things simple in a white sweatshirt with black trousers. 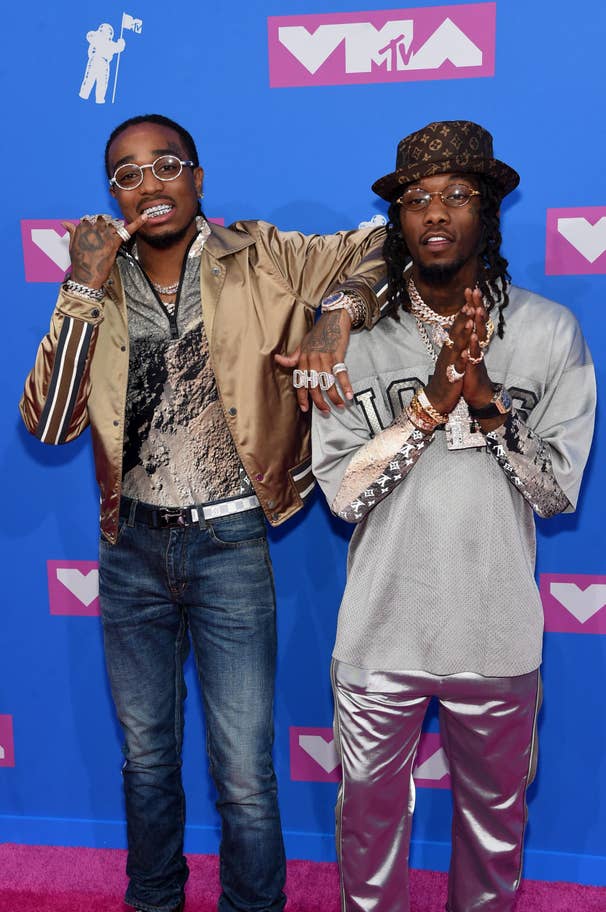 Two out of Migos’ three members arrived at the VMAs with enough accessories to startle even the burliest of airport security staff – imagine going through the scanner with those rings. 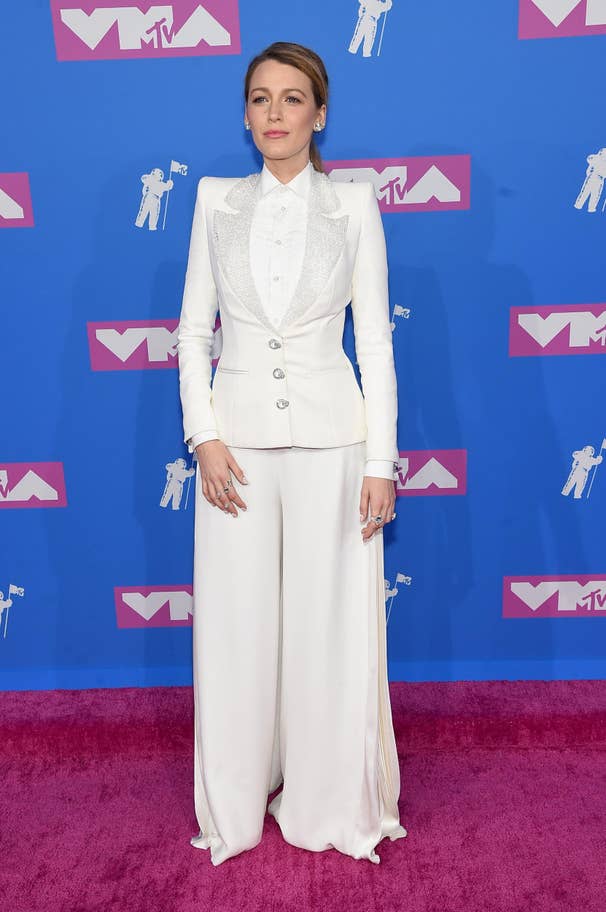 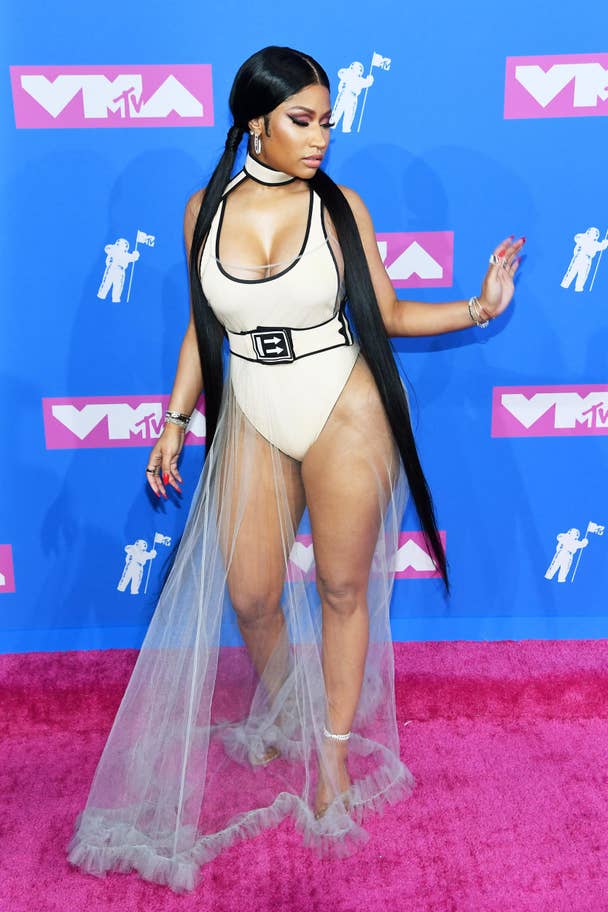 Never one to miss an opportunity for sartorial eccentricity, the ‘Anaconda’ singer opted for a belted bodysuit by Off-white complete with a sheer cape. 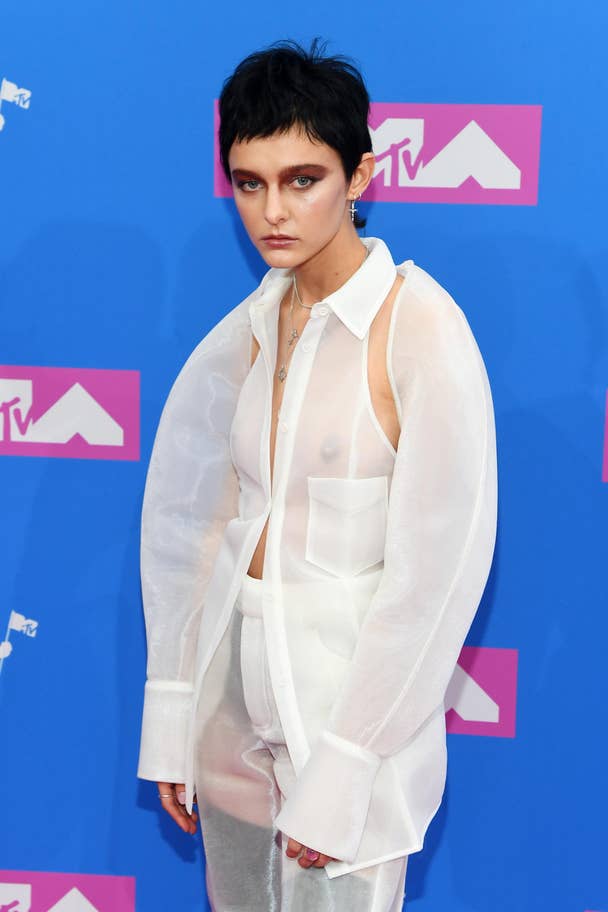 Androgyny takes a sophisticated turn with Saint’s seductive all-white look, finished with a peppering of melodrama thanks to those heavily-shadowed eyes. 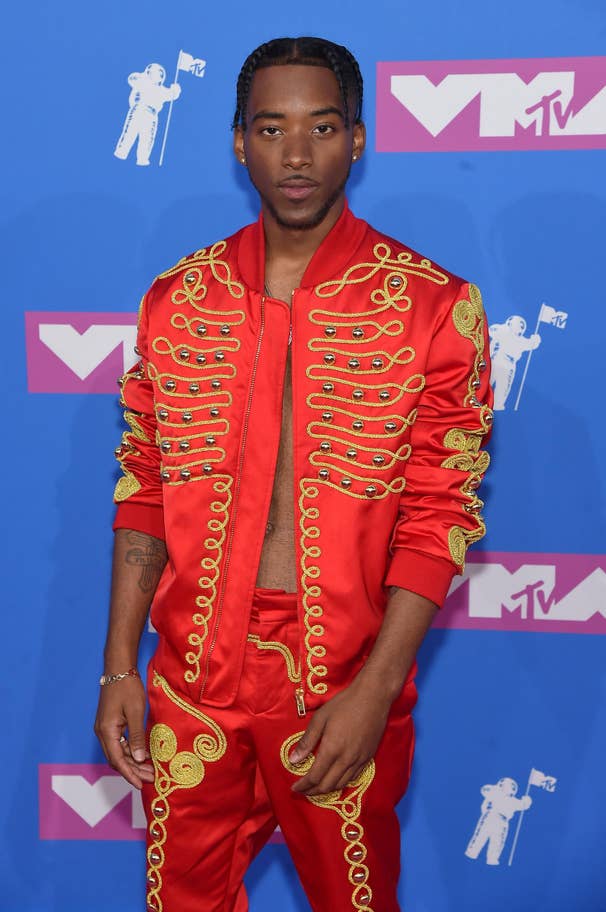 If in doubt, Moschino it out. The ‘Detroit’ actor’s scarlet ensemble is fit for the circus, in a good way. 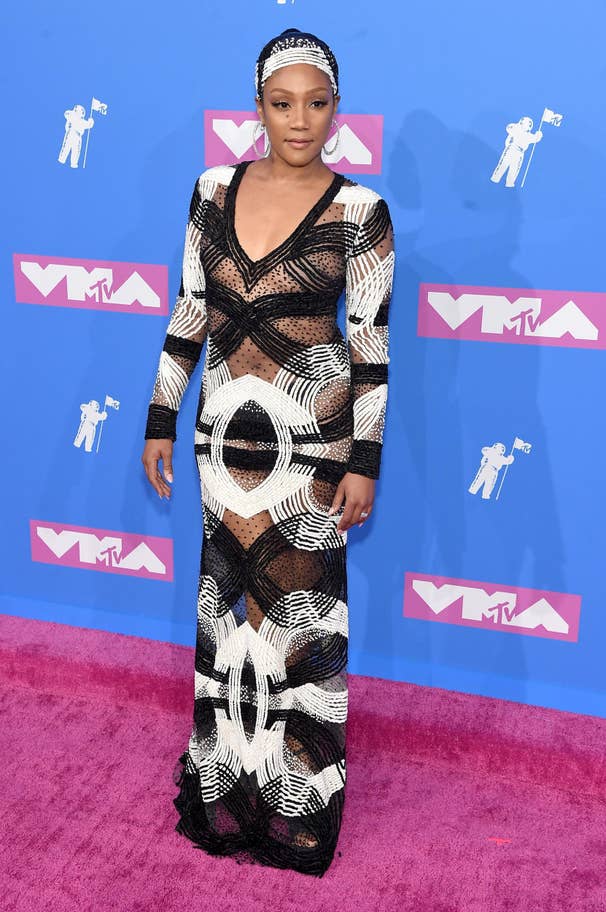 Sporting a monochrome gown by Naeem Khan, the American comedian brought an elevated sense of grandeur to her red carpet look with Chopard jewels. 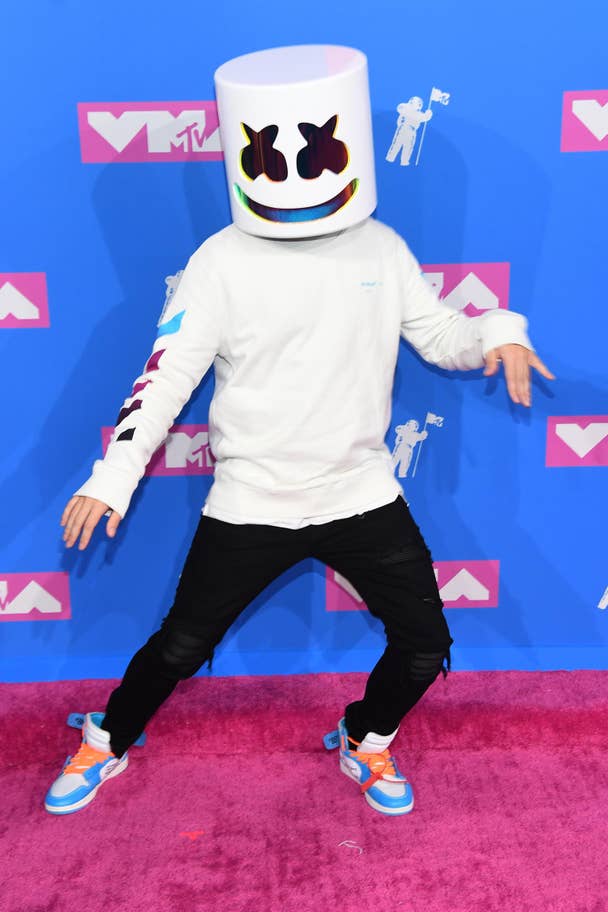 Proving that style might just be a state of mind, the US music producer arrived wearing his signature mask, which really speaks for itself sartorially, hence the simple black and white attire he wore to match. 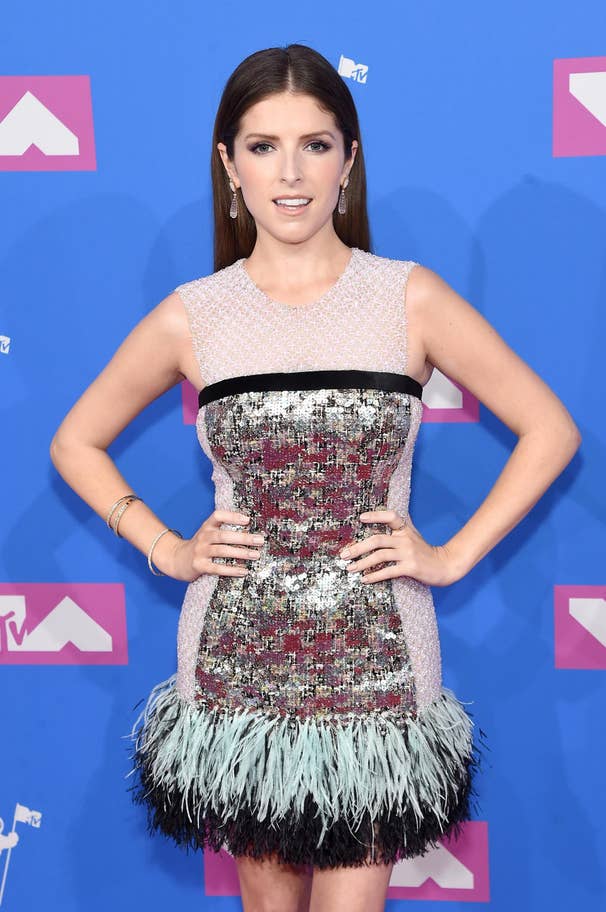 The ‘Pitch Perfect’ singer looked straight out of the 1920s in this sparkling mini dress which came complete with a flapper-girl trim. 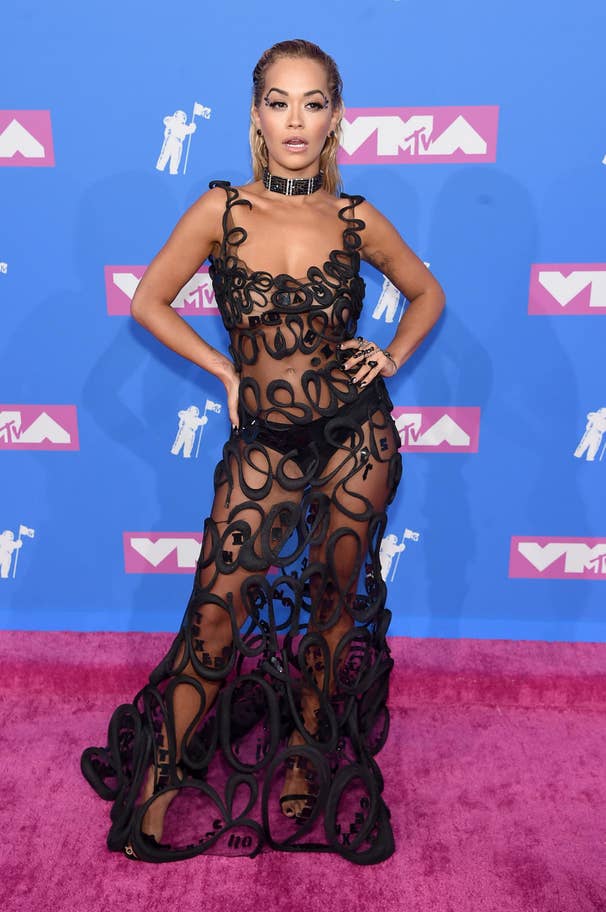 Jean Paul Gaultier dressed the British singer-turned-presenter in an eye-catching structured black gown. What it lacked in fabric, it made up for in baroque design. 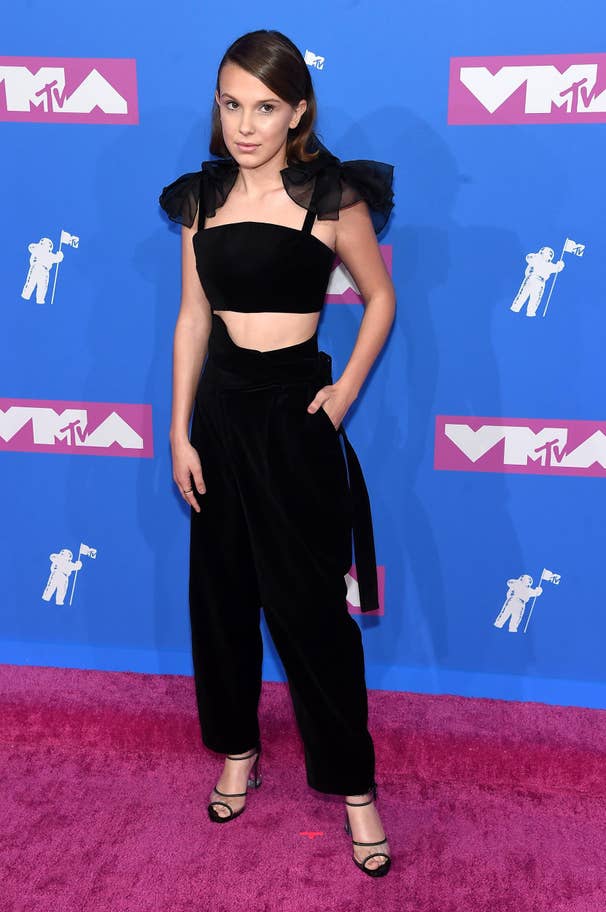 The ‘Stranger Things’ opted for a simple but stylish black jumpsuit by Rosie Assoulin, which would’ve been a somewhat stale choice had it not been for those flamboyant and pleasingly-girlish sleeves. 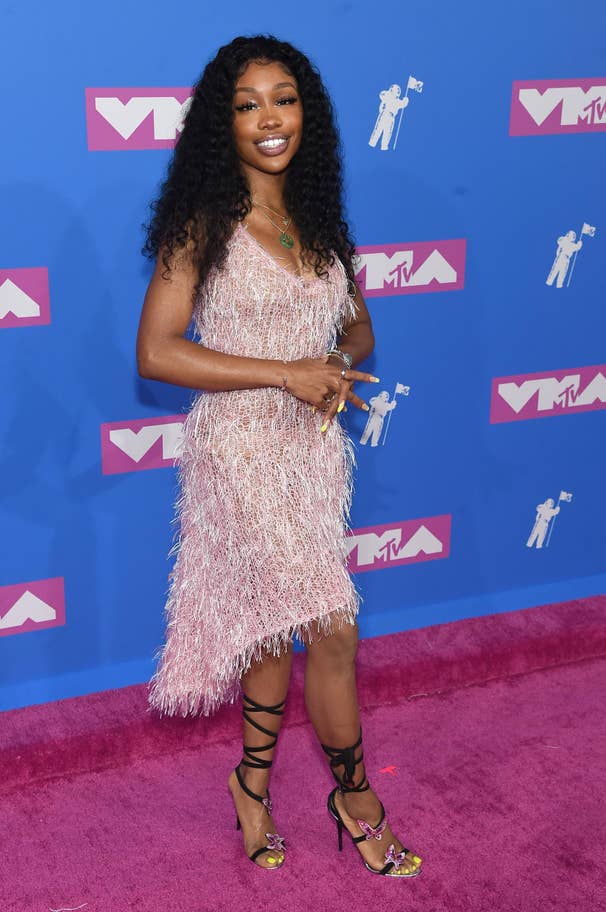 The ‘All The Stars’ singer fluttered on the fuchsia carpet in a dusty pink feathered gown by Rodarte. 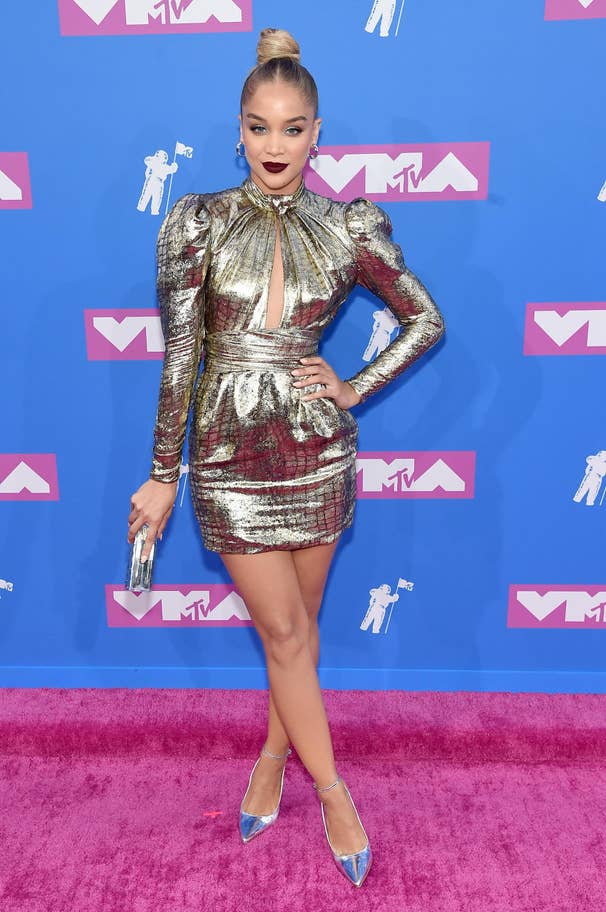 Robotics need not be reserved for the AI-obsessed Elon Musks of the world, as Sanders proved on Monday evening in this metallic mini dress, which aptly demonstrates the sartorial synergy of 80s tailoring with bionic artistry. 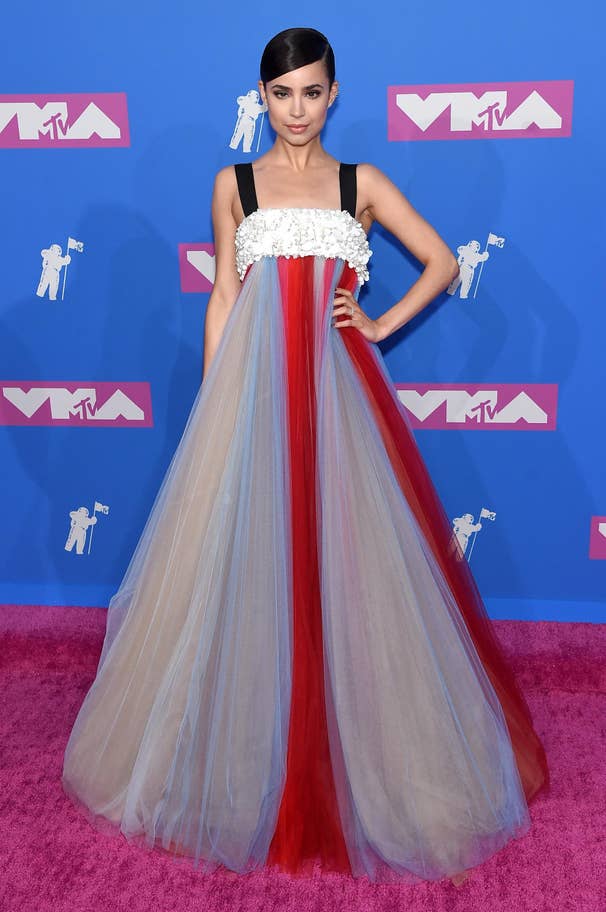 Proving that stripes are no longer a slave to breton tops and poolside towels, the former Disney Channel star stunned in this red and grey tulle gown by Carolina Herrera. 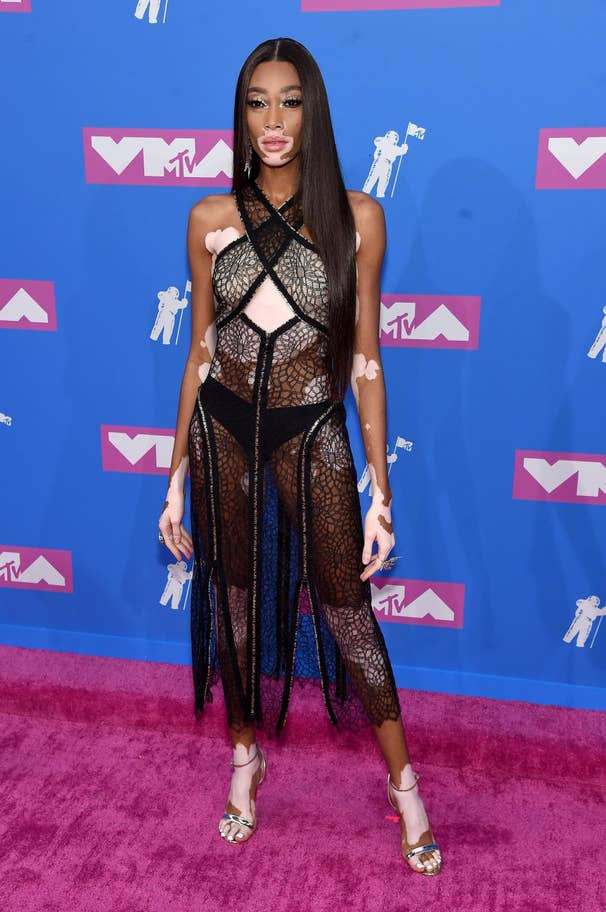